Again, The Guardian’s position as the number one newspaper in coverage of the real estate sector reinforced at the weekend, when it was honoured by the Lagos State branch of the Nigerian Institution of Estate Surveyors and Valuers (NIESV) for excellence and active reporting of real estate issues in the country.

The newspaper was recognised alongside other recipients in the industry at the 14th Honours’ Night of the branch entitled ‘Rewarding Excellence in Real Estate Sector’ in Lagos.
Attended by top operators, professional bodies and investors in Nigeria, the event held at the Civic Centre, Victoria Island, celebrated The Guardian’s rich reportage of issues in the industry.

Others include past presidents of NIESV, past chairmen of Lagos branch, managing directors of real estate companies and representatives of mortgage institutions. 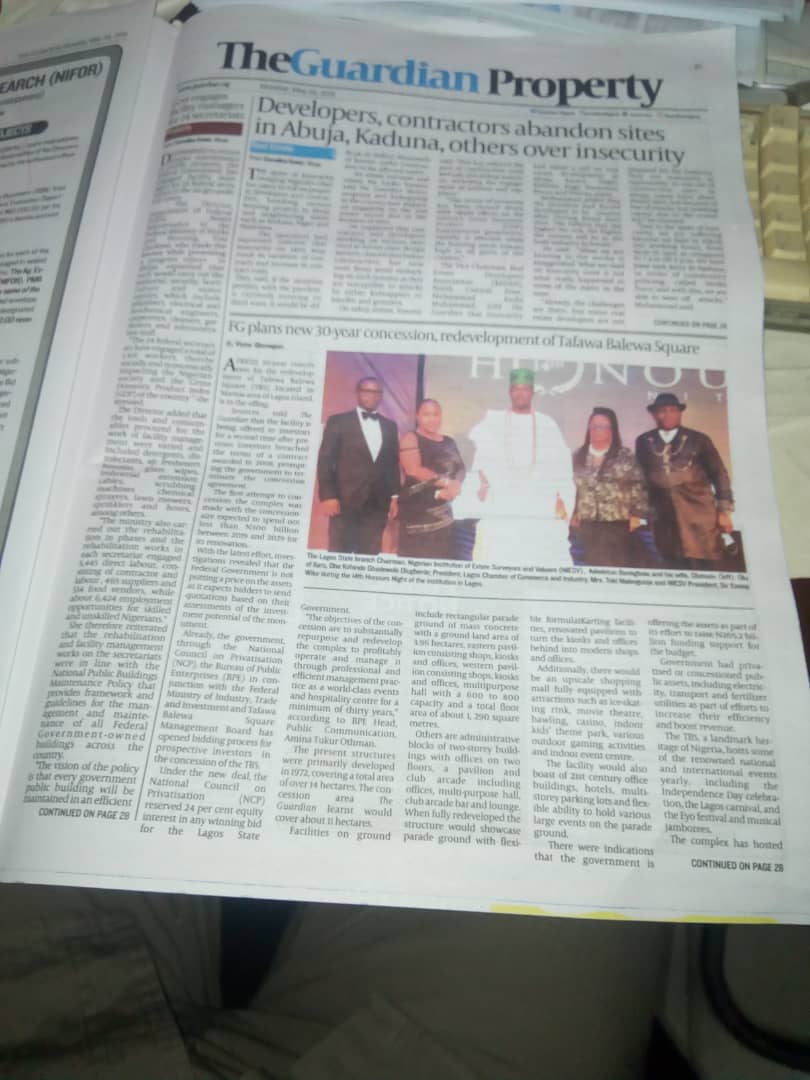 To the admiration of the gathering, Osas & Oseji came tops as the Outstanding Estate Surveying Firm. The Chairman, Lagos House of Assembly Committee on Housing, Rasheed Makinde; and Special Guest of Honour, Mrs. Toki Mabogunji, were also recognised.

The Outstanding Government Agency award was given to the Lagos State Valuation Office and received by the Permanent Secretary, Lands Bureau, Mr. Bode Agoro.

Group Managing Director, Alpha Mead and Mr. Femi Akintunde, an engineer, won the Real Estate Personality of the Year. Wike, who congratulated the branch for its exemplary leadership in the comity of chapters, affirmed that the national body would not rest on its oars in projecting the institution by working with its management committees and council as well as boosting advocacy to uplift the institution.

He declared that the institution would not relent in its commitment and contributions to the development of the housing sector in line with global best practice.

According to him, members are well prepared to provide professional services to government, individuals and organisations for more growth opportunities in the country.

Chairman of the occasion, Makinde, noted that NIESV members had maintained their status as major stakeholders in the economy. He said when other sectors collapse, real estate remains to contribute to the economy.

He disclosed that the Lagos government was working to improve housing stocks for residents and implored the practitioners to work harder to retain their first position in the built sector.

Chairman of Lagos branch, Mr. Adedotun Bamigbola, said the event was staged to reward those who have worked tirelessly towards progress in the sector.

He explained that nomination was done transparently and that voting deployed with wide range of professionals participating, while the finalists were picked from a pool of about 330 votes.

Bamigbola lauded members of the executive board of the chapter and elders of the profession for their unflinching support and advice, which, he noted, led to fundamental progress made in the past two years of his administration.